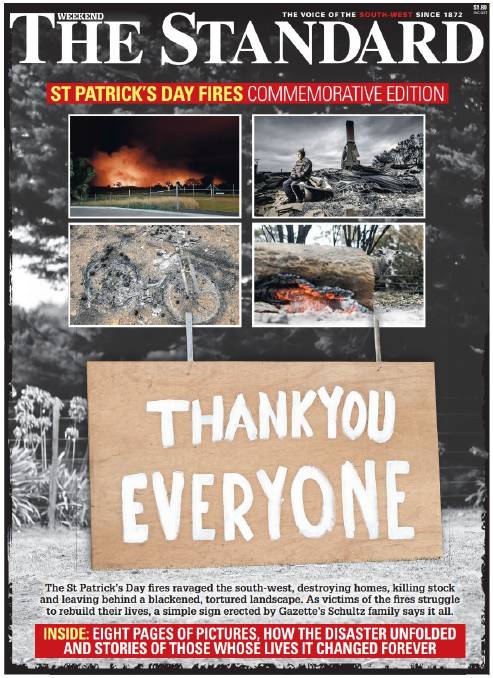 THE south-west had been warned and, as winds and temperatures rose to dangerous levels across the regions, emergency personnel were on high alert.

The fire risk was “severe” and incident management teams were in place in Warrnambool, Heywood and Colac in case the unthinkable happened.

Emergency Management Commissioner Craig Lapsley warned the weekend would “test us” and Victorians were told to dust off their fire plans and not be complacent.

As night fell across the south-west, the thing they had been dreading all day and hoping wouldn’t happen did happen.

Even though we’d been warned, few of us expected what unfolded in the darkness of night.

On Saturday the mercury soared into the mid-30s on a day of total fire ban, the south-west soaked up the summery autumn weather.

Fire crews were on alert on Saturday afternoon as reports of lightning strikes near Casterton filtered in.

Guinness flowed as people celebrated St Patrick’s Day and the colour green, but by the next morning our green landscape would be black, bearing the scares of a night that has been described with words not spoken in these parts for years: “apocalyptic”, catastrophic”.

Around 9pm Saturday, as many kids in the fire zone were probably in bed sleeping, the first of the fire icons had popped up on the Emergency Victoria map.

Near the Terang substation, power lines are believed to have clashed and arced and molten metal fall to the ground sparking the blaze.

See some of the devastating footage here, as captured by The Standard journalists.

About 15 tankers were initially called to fight the grass fire which was burning along the Princes Highway towards the substation.

Wind gusts in the area at the time reached up to 104km/h and the fire soon jumped the road. A watch and act alert was issued.

For the SES crews across the south-west, things were just starting to get frantic. By 9pm they had had 44 requests for assistance which 14 units were dealing with.

The weekend’s fires across the south-west were some of the largest that many experienced south-west firefighters had seen.

Country Fire Authority south-west assistant chief officer Rohan Luke said the fires that ignited about 9pm on Saturday in high winds were also some of the most difficult for firefighters to fight. “You are chasing fires in the dark in extreme weather,” he said.

On the outskirts of Camperdown a ​t​ree limb fell across power lines and brought them to ground sparking a blaze.

At The Sisters near Garvoc, a power pole snapped and fell over in high winds sparking the blaze.

Around the same time at Gazette near Hawkesdale, a fire started after a tree from a blue gum plantation fell onto power lines.

Between 9pm and 10pm there were 35 more calls for assistance.

See how just some of the many fire victims were impacted here.

There were more than half a dozen grass fires, or reports of fires, burning across the south-west and soon emergency warnings were being issued for Boorcan, Camperdown, Gnotuk, Naroghid.

The out-of-control fire was burning towards the Camperdown Golf Club.

The watch and act advice at Garvoc was upgraded to an emergency warning. 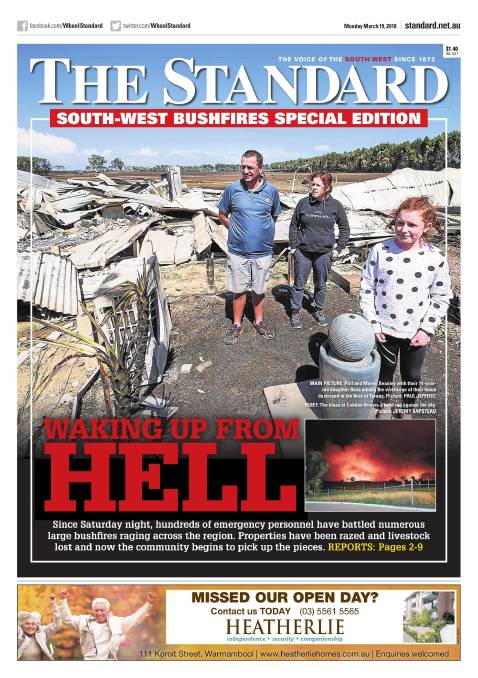 As a CFA spokesman said at the time: “Things are happening quite fast.”

It was hard to keep count but at one point there were more than 25 fire icons (reports of fires) across the south-west, and a fire victim recalled at one point noticing there were 61 reports of incidents – which includes fires and trees down –  on the map.

Residents in the four fire zones were either fleeing the approaching flames or preparing to evacuate.

Friends were checking on neighbours and loved ones were calling each other to warn of the danger or just to check on family and friends.

The SES received 67 calls for help between 10pm and midnight. All up on Saturday they had received 151 calls for help in the south-west, 105 reports of them were for trees down, many of which were causing traffic hazards to those fleeing the fires. There was also five calls to help rescue people.

Up to 800 people fled to relief centres that were set up in towns including Warrnambool, Colac, Cobden and Camperdown looking for either a place to stay or for information.

Hundreds more slept in their cars at the Peterborough lookout or made it to the safety of friends and family.

Somehow, despite it all there were no lives lost. 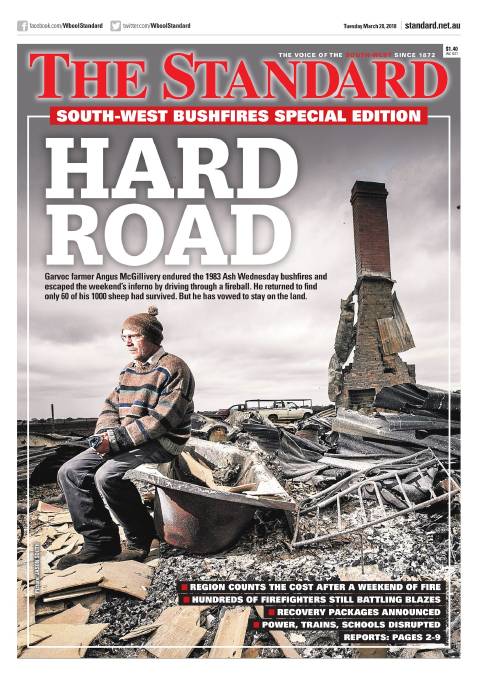 Something Bernie Harris called a “miracle”. Mr Harris, who lives at The Sisters and was a firefighter on one of the first trucks on the scene of the Ballengeich fire during the tragic 1983 Ash Wednesday fires, reflected on the conditions.

“The wind was just ferocious. It was vicious,” he said. “It’s just my opinion, but I thought this was worse than Ash Wednesday. But one was day time and one was night.”

Hawkesdale CFA group officer Pat Noonan said it was a phenomenal community effort to get all of the town's residents evacuated at 11.30pm.

“People were going around the town doing door knocks to get everyone out,” he said.

“Around about half-an-hour after that the police called in and they had been notified that the town needed to be evacuated. We told them how everyone had already been around and done it.”

By early morning, reports were coming in that up to 12 homes had been lost, but by Sunday evening it had be updated to 18.

By then it was reported about 40,000 hectares had been destroyed in fires at Garvoc, Terang, Hawkesdale and Camperdown. 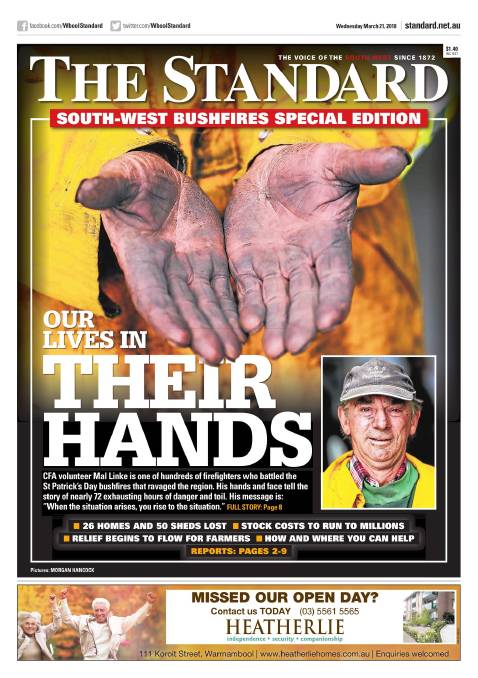 Deputy Premier James Merlino told a briefing on Sunday that 280 firefighters and 29 aircraft had been deployed across the state.

On Sunday, the SES received another 178 calls for help.

Many red-eyed people across the south-west were getting ready to return to their properties, preparing for what they might find.

The community, which was just waking up to the enormity of what had happened, sprung to action with offers of help pouring in at relief centres.

As the smell of smoke blanketed the district, more than 300 firefighters continued to work on the fires as losses were assessed.

By 11pm the Terang fire was officially listed as contained, four hours after Hawkesdale, Garvoc and Camperdown fires were listed as under control.

All of the Barwon South West’s 24 SES units were helping fire efforts between Saturday and Monday, having responded to 347 requests for help. Their equipment was also used to light staging areas and supporting affected communities. 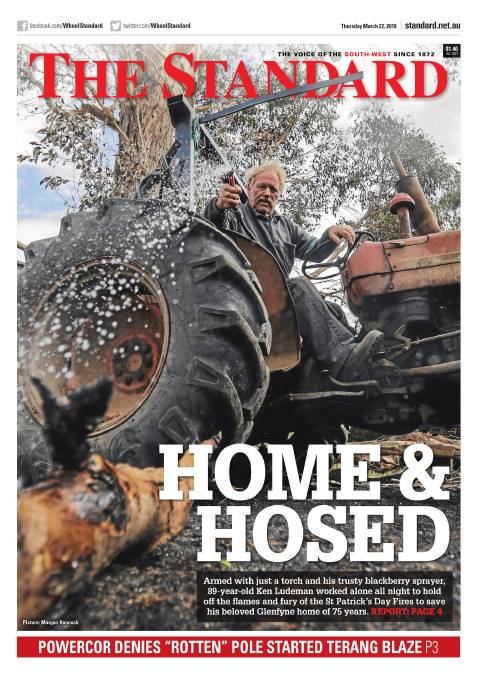 Victorian Premier Daniel Andrews flew in to tour fire-affected areas around Terang and Cobden describing the devastation from the “unprecedented fire event” as “absolutely heart-breaking”.

He said the losses could have been so much worse if it wasn’t for the “dedication, the skill, and the guts of these local CFA members”.

Follow this link to see some of the messages of support and thanks. 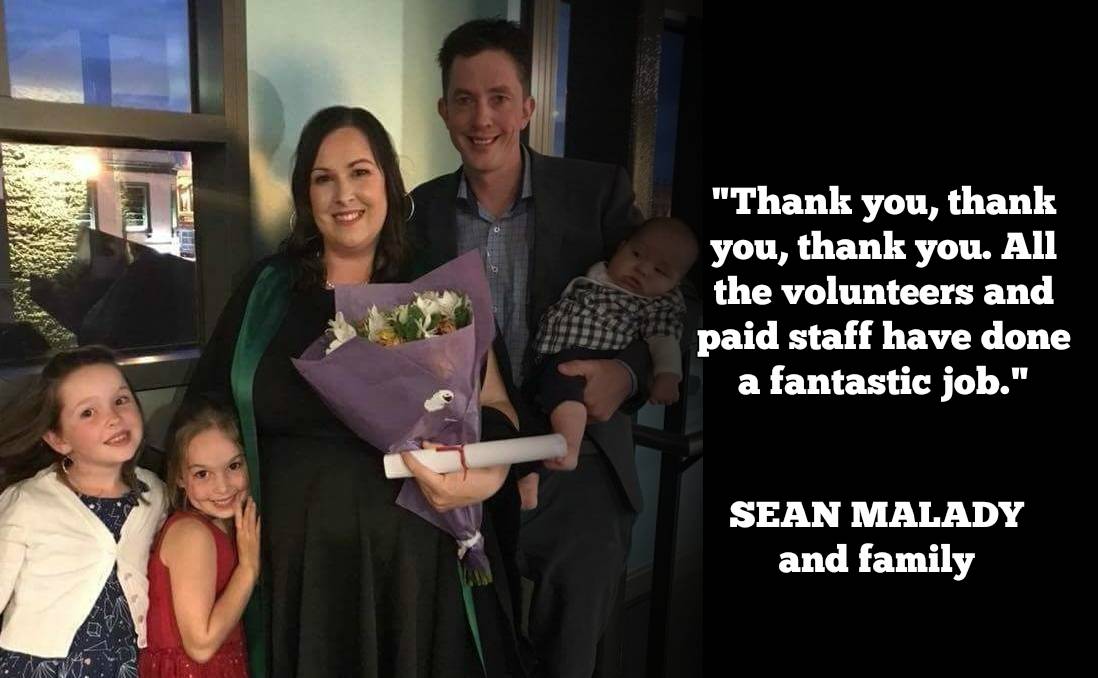 Community support for those affected by the fires begins to flood in as Go Fund Me accounts are set-up, residents organise drop off points for goods and clothes and fundraising events are planned.

Blaze Aid plans three operational points in the region to replace burnt out farm fences and the Victorian Farmers Federation has a Disaster Relief Fund where people can donate fodder, food and agistment.

The damage toll from the St Patrick’s Day fires rose to 26 homes (unofficially) and more than 50 sheds as the last of the four major fires were contained.

At least 219 farms have been affected with livestock losses expected to surpass 10,000 head.

Helicopters could be seen hovering over lakes to fill up with water in attempt to douse the plumes of smoke from four nearby peat fires in lake beds. 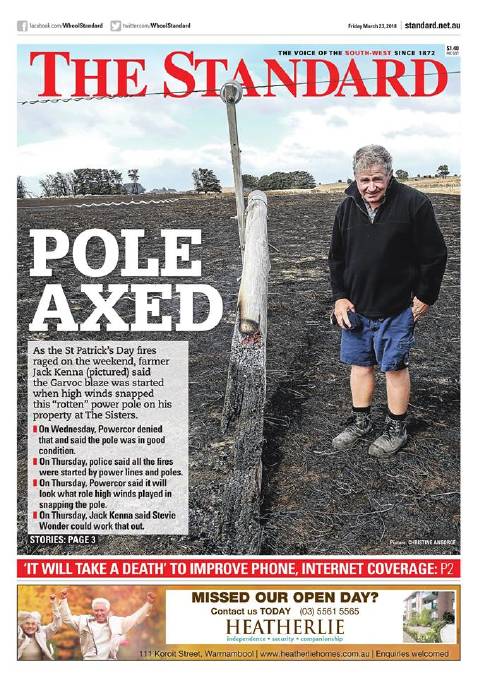 Around lunchtime Thursday firefighters brought under control a break-away fire at Gerrigerrup near the Gazette fire.

Around 40 people were evacuated overnight after air-quality monitoring found unsafe levels of carbon monoxide due to the Cobrico peat fire.

Authorities warn the four peat fires in the area could burn for days or even weeks causing continuous smoke.

Latest figures revealed 24 houses and 57 sheds were lost throughout when the four tore through more than 14,600 hectares.

At the Gazette-Hawkesdale blaze, 3665 hectares burnt. The Camperdown fire burnt 344, in Terang 6608 hectares were lost and in Garvoc 4031 hectares. It is estimated 2439km of fencing has been destroyed.

There is a high fire danger warning for the south-west region and strong winds are forecast for the weekend which may elevate the fire risk and increase smoke from existing fires.